I’ve been having lovely dreams about climbing Mount Shasta again, those kind of dreams that are so magical and meaningful that one’s hopes in describing the dream could never be realized. I was beginning to feel a sort of alpine itch. That night, I began solidifying my birthday plans, which would certainly involve camping, and I would certainly be alone. I decided to head up to Mount Ashland on the eve of my birthday and skin out…

…”skinning” is a backcountry ski term. A skin is a giant reusable sticker with a one-way mohair/nylon blend that you stick to the bottom of your telemark or randonee ski, allowing you to walk up steep slopes and giving you access to sick lines without the use of lifts!…

…under the nearly-full moon to find a cozy little snowy den for myself.

I parked at Road 20 around 8:30 pm. I had borrowed a load of warm gear from Frankie: an extra Thermarest, two emergency blankets, a bivy, and an unforgettable pair of down pants. I had never been winter camping in my life, nor had I skied with a heavy pack, and the only people I could consult were Allen & Mike, but I had been raised in a cold, snowy land and grew up camping in remote wilderness. At the very least, Dad felt confident in me.

I packed up everything, strapped my skins on, and set off into the night. It was so bright out I didn’t need my headlamp, reminiscent of my Mount Shasta summit night with David back in 2012. I was so alone. It was so quiet. Shasta was gleaming in the distance. My cares from the day fell away and I felt deep peace and happiness. Nowhere to go, nothing to do, just develop the rhythm of sashaying skis and poles and breathe. I casually tapped the snow to my right every now and then, testing the softness. It was reliably crusty for a while. I eventually came to an opening in the trees that was slightly tracked out, the snow pillowy and glittering, my pole tip disappearing with my last hopeful tap. I took off my large backpack and strapped on my smaller pack for water and for skin storage once I reached my destination.

Skinning up a slope is hard, satisfying, beautiful work. I didn’t quite make my summit goal, as the snow started to get crusty, but I probably climbed for about 30 minutes. I looked over to the moon and noticed how she illuminated the tracks from that day’s skiers. I saw how it was diamond-like and perfect. I felt my labored breathing.

I got a little lost on the way down and found myself in some trees on the way to my pack. I thought for a minute about tree wells but sailed through the forest unscathed. I made it to the road, found my deserted pack, and carried the load another 15 minutes to an open meadow near Grouse Gap Shelter.

Getting a bivy set up to keep one warm in the snow takes some maneuvering. Before taking off my skis I stamped out flat little bed. Into the bivy I stuffed both sleeping mats, threw in my bag, and piled in one of the blankets. Putting on the down pants was a feeling I’ll never forget: a soft warm cloud around my tired, cold legs. I ate a couple of chunks of smoked salmon Aaron had sent me; I had saved the fishy treat for this day. I scooted in to my little thermal cocoon, zipped up, and that was it: I was alone on a mountain in the snow on my birthday, warm and very sleepy. 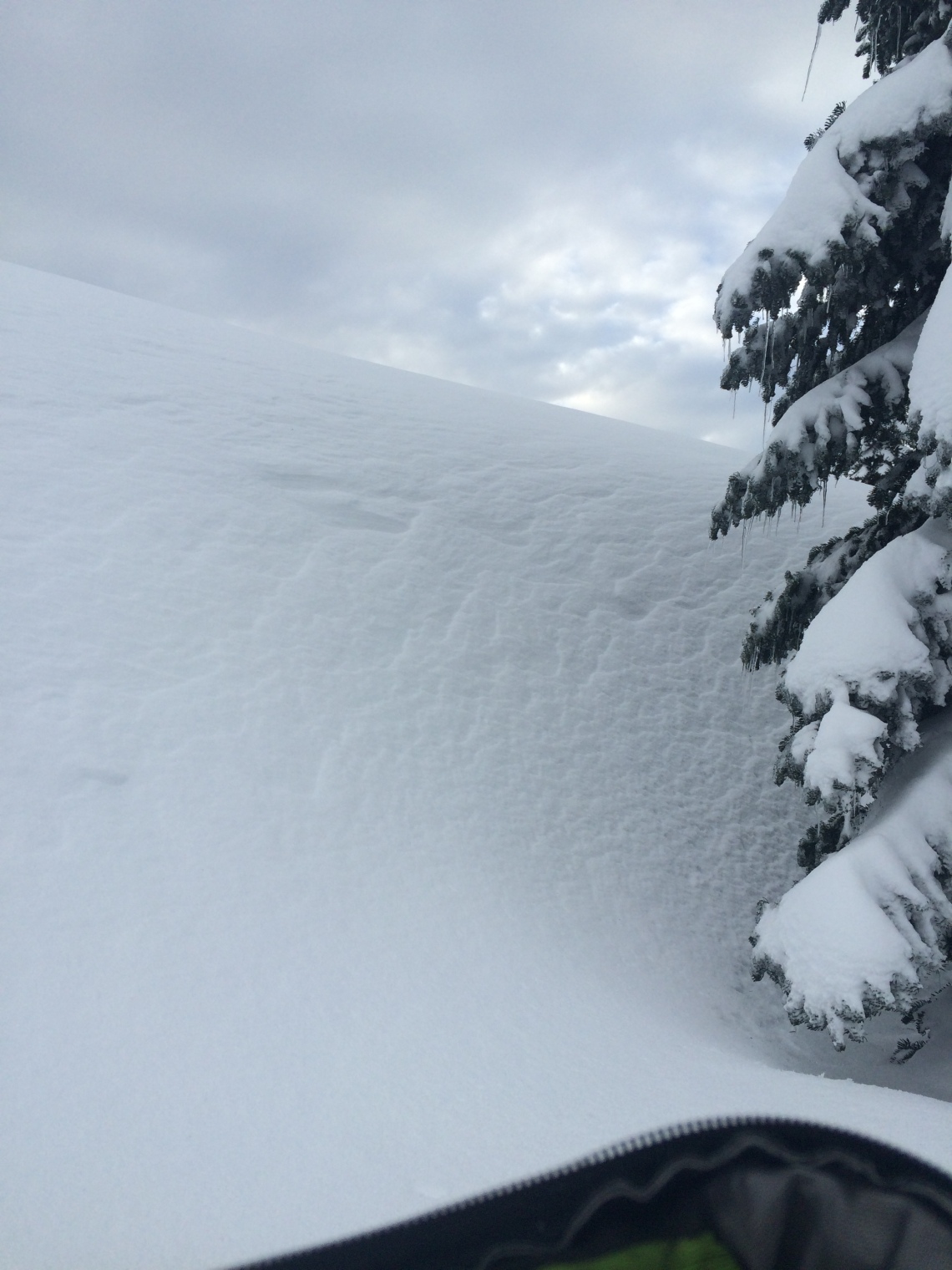 The view from my bivy cocoon in the morning

I slept like one would expect. I was an agitated pupa. I had to head out right when I woke up to get the car back to my friends. I skinned out groggy. About 15 minutes later a dog cruised by me, followed by a young backcountry skier lady. We looked at each other happily and became instant friends, skinning out together back to our cars.

Thus began my newfound love for winter camping and a deeper appreciation for backcountry skiing and all the freedom and adventure it provides.

I was born from love and in love with nature and music. Strong women have held my hand through beautiful and difficult times. I believe that creatively, positively affirming women can have extraordinary impacts on their moments, days, years, and lives. Thank you for reading. View all posts by posaffirmation